Thank you, Sandra Tremel, Federal Official Court Reporter to Anne C. Conway, for referring TransPhoto, Inc. to me to report Former President Bill Clinton as he delivered his keynote speech at the recent ICON CFRST General Manager’s conference at the Orlando World Marriott Hotel and Convention Center here in Orlando this past weekend.  Linda Bulmer, of Bulmer Reporting, offered to accompany me to the event and offer any assistance. 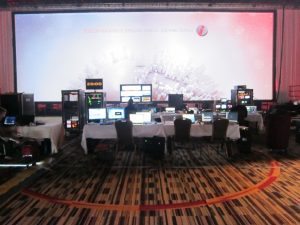 I needed all the help I could get as I slowly made my way through the shoulder-to-shoulder crowd waiting outside the ballroom doors.  I’d like to say we had a front-row seat, but instead, we had a backstage pass with a bird’s eye view of all the technology and of Bill Clinton and the Secret Service as they both entered and exited from the rear of the ballroom.

Thankfully we arrived with plenty of time to spare to set up and get our audio feed up and going.  After working out a few glitches and miscommunications, we were able to sit and listen to incredible speakers:  CEO’s Arne Sorenson and Indra Nooyi, and Bill Marriott, founder of the Marriott Corporation.  I had started out warming up while listening to them talk, but it wasn’t long before I stopped writing so I could concentrate and absorb their lessons and stories.

Did I mention Linda Bulmer is a great photographer as well as a reporter?  In spite of an announcement not to take pictures at the front of the house, Linda was able to take a few at the back of the house.

Thank you again, Linda, for these great pictures and your willingness to help!