This past October, All Good Reporters’ team of certified CART providers was hired by OPUS Agency, an event management company out of Beaverton, Oregon, for the purpose of providing  CART (Computer Aided Realtime Translation) services for six hard-of-hearing students/speakers at the 2017 Grace Hopper Celebration of Women in Computing.

This year’s event was held at the Orange County Convention Center in Orlando, Florida.  Extra kudos to reporter extraordinaire Tony Trujillo for arriving at the crack of dawn — we’re talking 6 a.m. — to caption their first session scheduled at 7 a.m.  Over the next three days, from 8 a.m. to 6 p.m., our providers — Darlene Herndon, Debbie Arter, Susan Wasilewski, Tony Rolland, Tony Trujillo, Elizabeth Speer and Rita Meyer — shadowed their students from one side of the conference to the other with their Stenograph machines and laptops, realtiming the seminars.  If you haven’t attended a seminar recently, oftentimes there’s multiple speakers speaking simultaneously in conference rooms with poor acoustics.  By having the realtime readily available, the students were better able to follow along and actively participate in these seminars.  By the end of the day, or no later than the conference end, we also provided our rough draft ASCII files to our attendees for their future reference. 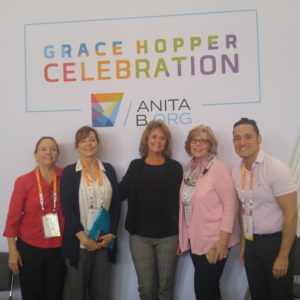 For those of you not familiar with the annual Grace Hopper Celebration, it touts itself as the world’s largest gathering of women technologists.  It’s also a networking and informational experience.  This year they awarded over 600 travel and conference scholarships to students — a few of which we had the pleasure of working with as they attended and moved from session to session during this 3-day event.  There was also a career fair where those same students had the opportunity to interview with multiple national tech companies.  Many of those companies hired attendees before the conference ended.  Next year’s celebration is slated for September 26 – 28, 2018 in Houston, Texas.