All Good Reporters was on hand both in Brevard and Volusia County reporting the official record of  NASA/Kennedy Space Center’s recent NASA Proposed Impact Statement public meetings held in Titusville, Florida and New Smyrna Beach, Florida this past March.  These were follow-up meetings to those held two years ago in the same venues.

Local residents and county officials were in attendance while NASA officials and their consultants from Solv, LLC. outlined their proposed twenty-year development plans for Kennedy Space Center.  NASA wants to develop the center into a multi-user spaceport with both commercial and government contractors. After their presentations, those in attendance voiced their comments or suggestions on the record regarding NASA’s plans. 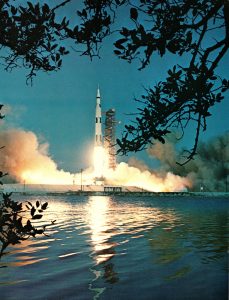 (Courtesy of Google and Wikipedia)

Apollo Program
From 1967 through 1973, there were 13 Saturn V launches, including the ten remaining Apollo missions after Apollo 7. The first of two unmanned flights, Apollo 4 (Apollo-Saturn 501) on November 9, 1967, was also the first rocket launch from KSC. The Saturn V’s first manned launch on December 21, 1968 was Apollo 8‘s lunar orbiting mission. The next two missions tested the Lunar Module: Apollo 9 (Earth orbit) and Apollo 10 (lunar orbit). Apollo 11, launched from Pad A on July 16, 1969, made the first Moon landing on July 20. Apollo 12 followed four months later. From 1970–1972, the Apollo program concluded at KSC with the launches of missions 13 through 17.
When was the Kennedy Space Center built?
On July 1, 1962, the site was named the Launch Operations Center, achieving equal status with other NASA centers; and on November 29, 1963, the facility was given its current name by President Lyndon B. Johnson under Executive Order 11129 following Kennedy’s death.
When did Cape Canaveral change its name?
On November 28, 1963 President Lyndon B. Johnson announced in a televised address that Cape Canaveral would be renamed Cape Kennedy in memory of President John F. Kennedy, who was assassinated six days earlier. President Johnson said the name change had been sanctioned by the U.S. Board of Geographic Names.