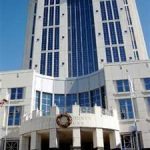 Orange County Courthouse, Orlando, FL
A thorny topic reared its head this past week at the Orange County Courthouse in the Casey Anthony murder case, over payment of an out-of-state court reporter’s transcript. By being declared indigent by the courts this past March, fees paid to vendors for services rendered in Casey Anthony’s murder case fall under the Justice Administrative Commission’s (JAC) discounted rates. Requests must follow their guidelines and be approved by the Chief Judge.

Gerald Stogsdill, owner of Stogsdill Court Reporting Services in Tennessee, wrote a letter to Chief Judge Belvin Feb. 8, explaining a dispute over payment for deposition transcripts between his firm and Anthony’s attorneys Cheney Mason and Jose Baez. “It obviously has been represented to Your Honor that my office had initially agreed to provide court reporting services at rates significantly lower than normal rates and then refused to honor the discounted rate, and I believe the reason given the Court was my alleged claim that the job was difficult and took more time than expected,” Stogsdill wrote. “These statements are not true,” he continued. “I cannot ignore the attack on my integrity and reputation without responding.”

For those not familiar with the JAC, its function and purpose, the JAC was created as a central office providing administrative services on behalf of many of Florida’s state agencies closely tied to the judicial system. The commission performs a number of administrative functions for its client agencies, including: processing all court-appointed counsel, state attorney, public defender and private court-appointed counsel due process costs.

“Although it has been represented to the Court that I tricked Mr. Baez and Mr. Cheney (Mason), I believe that our court reporting services were obtained under false pretenses,” Stogsdill wrote. “I would not have agreed to provide court reporting services under the substantially lower rates and terms established by the JAC guidelines.”
Stogsdill said his business has been operating for more than 20 years with a reputation “for being fair and ethical, a reputation that would have been impossible to establish and maintain with shenanigans like those I have been wrongly accused of by the attorney(s) for Ms. Anthony.”

Our hats are off to Mr. Stogsdill for standing up for himself, his firm and his firm’s reputation. All vendors and their clients should come to a meeting of the minds on fees charged and when they’re paid before services are rendered. So what do you think? Do you agree or disagree?