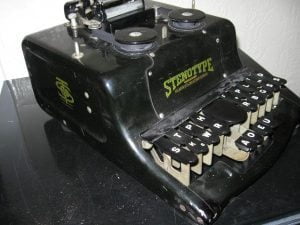 Before leaving on vacation recently, I sent both of my steno machines in for long-overdue overhauls.  I ended up sending the machines to two different service providers in Florida as one of my machines was the newer Elan Mira:   John Dretto of SMS Machine Repair in St. Pete, Florida and Stenoworks in Greenacres, Florida.  For a list of steno machine repair providers in other areas of the country, be sure to check out StenoSearch’s site.

John Dretto called me this morning about the repairs he’d done on my Stenograph 8000LX (my spare machine).  After adding up all the damage, including shipping, the total came close to $400.  I had a flashback to my first manual machine purchase 35 years ago when I balked at paying $300.  Actually, my parents did the balking as I was only 18, just out of high school and no job.  I didn’t even know what a steno machine was, too boot!  The school called about two weeks before classes started; asked if I had my machine, to which I responded, what machine?

Nowadays, new steno machines prices can vary from  $4500 upwards.  To help ease the sticker shock, be sure to check auction sites such as Ebay and maybe even Craigslist to look for machines.  Used machines oftentimes are barely used when purchased from former court reporting students.  Working reporters are often upgrading their equipment, so you can find spare or replacement machines for very reasonable prices.